The idea of this page is to try to answer the questions frequently asked of coppice workers at shows. Use the links below to navigate around the page.

What is coppice?
Why coppice woodland?
What can coppice products be used for?
What are the benefits of landscape and wildlife conservation?

Many British broad-leaved trees including hazel, chestnut, ash and oak can be coppiced.
Coppicing means cutting the tree or bush down to the stump. The plant then re-grows producing multiple stems called rods or poles. These can then be harvested and the poles converted into a wide range of products.

The age that the coppice is cut will to some extent depend on the final product. As shown above chestnut was cut after two to four years for walking sticks although this market has virtually disappeared in recent years.

This is probably one of the most commonly asked questions after “what is coppice?”. Many people see derelict coppice and think that it is wild wood. In most cases this it just neglected woodland.

Coppicing is probably one of the oldest forms of woodland management with archeological evidence of woven fish traps dating back to 5000BC.

Much of the semi-natural ancient woodland in the south of England has developed under coppice management with many areas being cut on rotation up to the mid 1960s, with others still being cut today. In some woodland there is evidence that the coppicing has been carried out for more than 2000 years.

There are many benefits, both economic and ecological, to coppice being worked. These include:

What can coppice products be used for?

As well as the products mentioned above, many of the species make very good firewood and charcoal.

What are the benefits of landscape and wildlife conservation?

Coppicing has many benefits to the countryside, the largest of which is its value to landscape and conservation. The British landscape would be a much less attractive place if our woodlands were lost. Here in the South we have some of the most wooded counties in England, with Hampshire, Dorset, Sussex and Kent heading the list.

The benefits are many and varied. They include:

As noted above there are a number of rare species that rely on coppice woodland for their habitat. These include species such as the Orange Woodland and Pearl Bordered Fritillary butterflies, as well as the common or hazel dormouse.

Many Ancient Woodland Vascular Plants (AWVP), usually known as ancient woodland indicator species, rely on ancient woodland or hedgerows for their habitat. As the name implies, these species are a good indicator of the age of a woodland, so the more AWVP species the older the woodland. 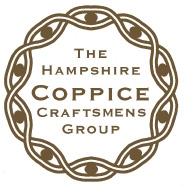